In the final piece of the One Health series on pandemicsthings are put in an even greater perspective. Looking at the two biggest challenges of our time, climate change and pandemics, this breakdown will examine how climate change has already impacted the spread of disease, and how this may continue if our climate keeps changing at this rate. 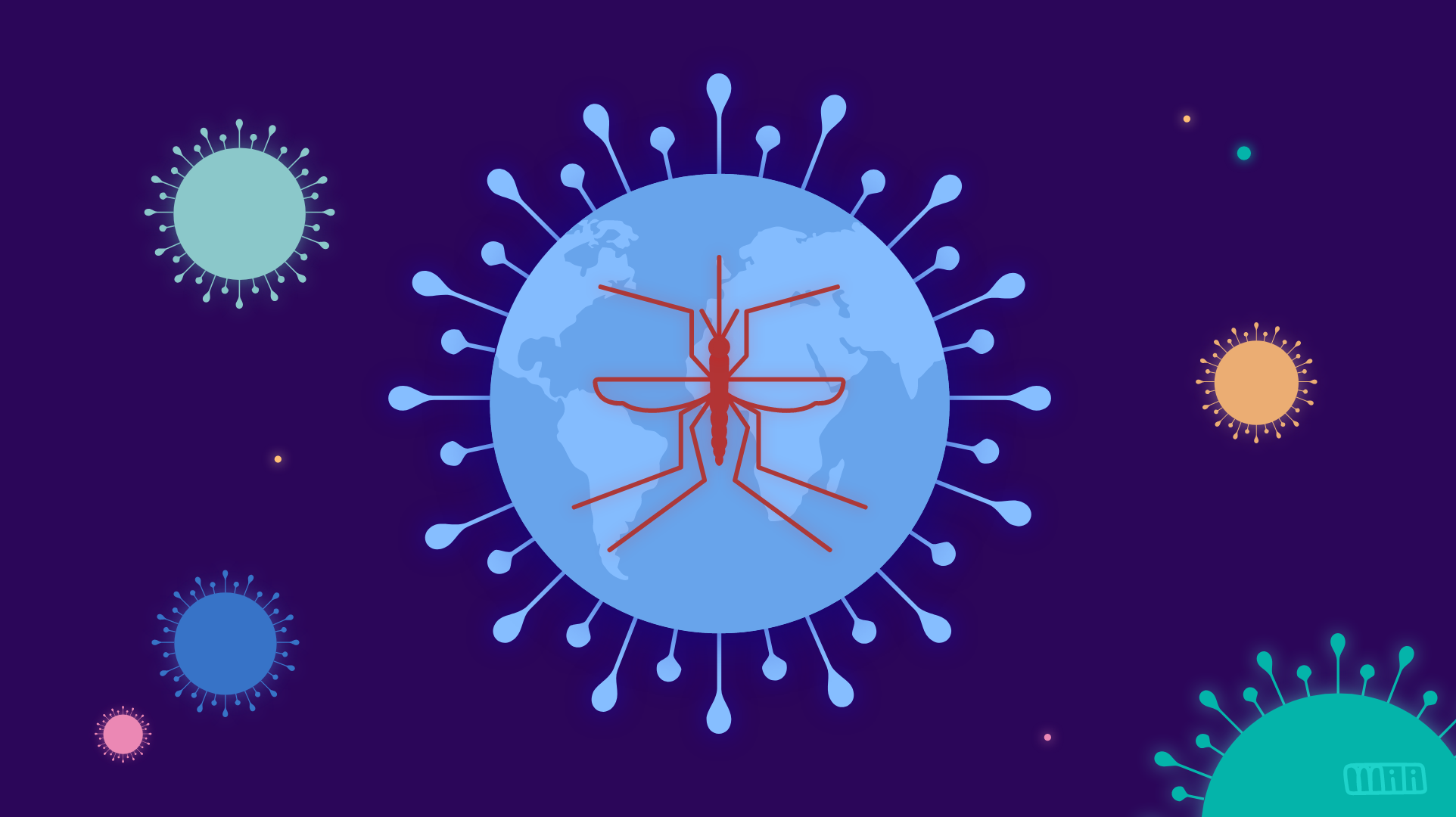 'Mosquitoes taking over the world' by @milie.dsgn for WISE. © 2021 Emilie Schaefer and What Is Science Even?

When thinking about climate change, most of us imagine arctic ice caps melting; islands disappearing under rising seas; drought or even hot summer days on the beach. However, there is far more to climate change than what is perceptible, and of course these changes are felt by animals and plants too. Alterations and disruptions in our ecosystems worldwide have consequently led to changes in the natural environment’s previously well balanced and harmonious ecology. As a result, a redistribution of zoonotic and vector-borne diseases has arisen. Despite general consensus that globalization is our greatest fear in terms of pandemics, climate change should not be neglected as not one driver, but one of the predominant causes. Let’s look at this in the context of vector-borne disease such as Zika and tick-borne encephalitis.

Zika on vacation in Europe

The first time we saw a locally-acquired case of Zika virus in Europe was in October of 2019 near Marseille [1]. Why is that a big deal? Zika virus (ZIKV), along with many other viruses of this family such as Dengue virus (DENV) or Chikungunya virus (CHIKV) are mosquito-borne. As such their distribution across the world depends on the distribution of these mosquitos, mainly Aedes aegypti and Aedes albopictus [2, 3]. Of course they have a preferred climate they reside in, and estimates show that Ae. aegypti development is optimal at 32 °C and Ae. albopictus development is optimal at 29.7 °C [4]. This does follow then that with the changing climate and increasing average temperatures these mosquitos can begin to inhabit new places [5, 6], which has been shown to already be happening.

Surveillance data compiled by the eCDC shows such a dynamic in Ae. albopictus. Over the course of only two years, a change in the places these mosquitoes inhabit has been observed (Figure 1) [7, 8]. It might not be a cause for concern for many, but it should be. Zika itself poses up to 14 % risk of Congenital Zika Syndrome in newborns, if the mother was infected with ZIKV during pregnancy. The risk of microcephaly is 4-6 % [9]. However, let us not forget that these same mosquitoes can carry CHIKV and DENV as well, which may lead to clinical manifestations such as Chikungunya fever or dengue hemorrhagic fever.

The exact course and prediction of these global changes are quite nuanced however, with different mosquitos being affected differently [10]. The consensus remains though, that continued climate change will exacerbate this spread of vector-borne diseases by the Aedes mosquitoes [6, 10, 11]. It is argued that for the case of Ae. albopictus, no mitigation is better than little mitigation, as the rapid rising temperatures may reach a threshold so warm, that it is unsuitable for this species. However, this is not the case for Ae. aegypti, the main vector for these viruses, for which the continued rising temperatures will allow them to expand their reach and the timeframe for which they remain in these areas per year [10].

Annotated map from ECDC and EFSA showing the distribution of Aedes albopictus in Europe in June 2018 (left)[7] and August 2020 (right)[8]. Changes are highlighted with a circle.

Climate change gives us the ticks

We all know the importance of avoiding tick bites as they can cause severe illness if we let them stay on for too long. One of the most known diseases is Lyme disease, or borreliosis. For transmission to occur the tick will usually need to be attached to the skin for more than a day [12]. The tick feeds on blood for up to 10 days, leading to a massive increase in size. One way of coping with increased body mass is for the tick to excrete excess water back into the host. This is a path for disease transmission [13]. However, there is a much more worrying disease that may be spread through ticks as well, Tick-Borne Encephalitis (TBE). Caused by TBE virus (TBEV), from the same family of viruses as Yellow Fever and Hepatitis C viruses, TBE is rarer than Lyme disease but may have worse complications, in some cases leading to paralysis. Additionally, TBEV transmission does not need as long an attachment as for the bacterial transmission of Lyme disease [14, 15].

Ticks, just like the mosquitos, have certain climates they prefer. Ixodes ricinus, or the castor bean tick, is the tick associated with Lyme disease and tick-borne encephalitis (no picture as their looks actually gives me the ticks), being the transmitter of 95% of tick-transmitted pathogens in Europe [13]. In a study examining the effects of microclimatic changes on I. ricinus, it was found that warmer temperatures are associated with higher incidence of TBEV infections [16]. This again begs the question on whether climate change will significantly impact the ecology of ticks and thus the distribution and incidence of TBEV across the globe.

Ticks require two predominant things; an ideal climate and a good supply of hosts (such as humans). Over the past few decades, both of these have been optimized for the ticks. In our first article of this series we have already discussed population dynamics. The other aspect, the climate, has been shown to have a favorable progression for ticks northwards [12]. However, not only do these favorable conditions lead to greater distribution of ticks, but the changing climate is actually accelerating the tick’s lifecycle. Additionally, a study investigating the effect of climate change on TBEV transmission estimated that the basic reproduction number (R0) is expected to increase by 31 % in 2021-2050, and increase 50% in 2071-2100 given the current climate change trajectory [17].

Final remarks and other concerns

Climate change therefore not only leads to loss of crops, drought and flooding but also indirectly affects the dynamics of ecosystems and thus, the spread of disease. This makes climate change a One Health issue. Despite us only covering one of the ways in which climate change exacerbates disease spread (through vectors), it can lead to epidemics in many other ways. For example, the increase in natural disasters may also lead to the spread of diseases such as cholera and norovirus through flooding and sewage systems that cannot keep up. Let alone, the NCD epidemics that can arise due to malnutrition, lack of clean water supply, and chronic illness due to air pollution. You may not agree with the amplitude of consequences that climate change may lead to but we cannot neglect that the trigger points are there and that snowball only gets bigger.