Continuing the breakdown and conversation, this second article of the One Health series on pandemics will break down the impact of urbanization and deforestation on the spread of infectious disease. Investigating how the global ecology has been changed by humans, we will show the link from these changes to disease outbreaks. 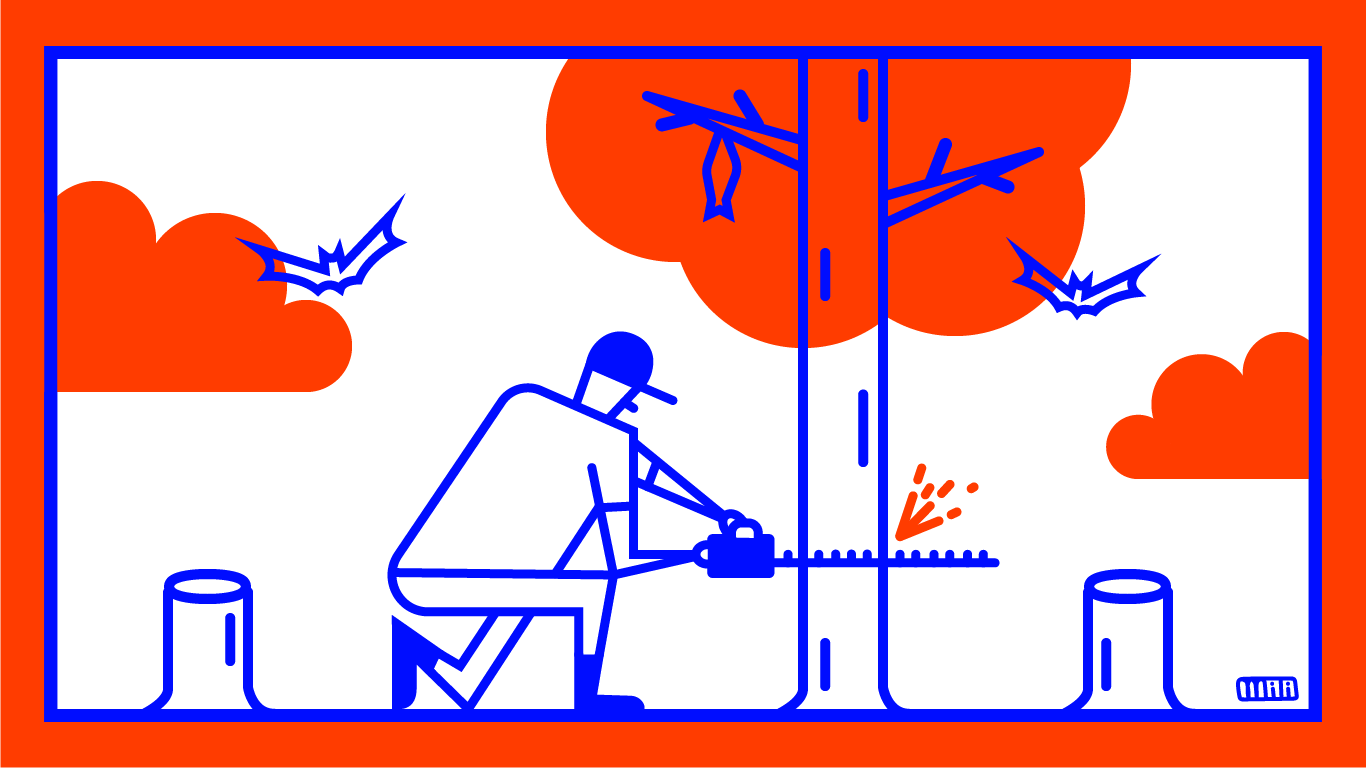 'Cutting down natural habitats' by @milie.dsgn for WISE. © 2021 Emilie Schaefer and What Is Science Even?

Ecology, according to The Ecological Society of America, is “the study of the relationships between living organisms, including humans, and their physical environment”. In other words, ecology aims to describe all connections in nature. Why is it important for understanding pandemics and the increasing spread of disease? It has been estimated that around 60 % of emerging infectious diseases are caused by pathogens moving from a non-human host to human – also known as zoonosis. Of these, around 70 % are caused by pathogens originating in wildlife [1, 2]. With that in mind, it becomes very clear that our interactions with wildlife plays an important role in our health, and that our influences on nature consequently change the diseases that emerge and reemerge among us.

Zoonosis: The jump of a pathogen from animal to human. How does such an infection take place? Just as diseases can spread from human to human in various ways (introduced in the previous article), so can these transmissions: Direct contact, through fomites, and through other means such as fecal matter, bodily fluids, etc. A prime example of such a disease is the Middle-Easter Respiratory Syndrome aka MERS. MERS-CoV – the virus causing MERS – is naturally found in Camels and thus does not cause any major harm to those animals. This virus can be passed on from these camels to their farmer, who aren’t as lucky and will fall sick, in some cases only after they have passed the virus on to other humans [3]. As such, zoonosis can take place in the wild, in villages/towns/cities, and even in our homes. There’s a reason why we shouldn’t hang out with racoons, regardless of how cool they look. Think rabies and roundworm [4].

However, the chance of acquiring these diseases will obviously be different. Our pets go through vaccination schemes, they are kept in a clean environment with humans since birth, and they do not interact with wild animals – the chance of our pets therefore carrying pathogens that may spill over to other species is quite low. Additionally, people do not tend to hangout in wilderness either. So why is it important to consider zoonosis as the cause of many disease? As the natural habitats of wild animals are altered due to urbanization and other human influences, the ecology changes with it. Our contact rates with wild animals go up, when we inhabit areas they used to live in and when they are being forced to migrate into cities to find more readily available resources [5].

Human impact on the global ecology

Ever since the Agricultural Revolution the Human Species has domesticated and changed natural habitats to serve human advancements. This has led to numerous domesticated species, from plants to farm animals. Good examples of such domestications are garden strawberries and pigs [6, 7]. Although these changes have seemed harmless, similar changes across the globe has led to a significant change in the world’s geography. From repurposing nature to play an industrial role, to deforestations for agriculture [8-10]. Although climate activist have long fought against such uses of nature, to protect the planet and its biodiversity, more direct impacts can impact health of human society as well.

Urbanization plays another important role [11]. We have already touched upon this in our article on globalization but unfortunately there is more to it. With the population of people in urbanized areas surpassing that of rural in 2009 [12], we now live in a world shaped by denser and denser populations as this growth continues exponentially. As a result, food and resources become very abundant in the cities, something that may be very attractive to animals. Think rats and raccoons.

The changing ecology and spread of disease

SARS, 2002; Influenza, 2009; MERS, 2012; Ebola, 2014. These are all recent and well-known outbreaks caused by zoonoses. What drives the emergence and re-emergence of these diseases? As the natural habitats of animals are broken down or fragmented, the chances of possible interactions with humans go up [13, 14]. This could either be caused because of the decreasing biodiversity and subsequently lack of natural hosts leading to more spill over to humans, or that the fragmented natural habitats brings human populations closer to the wildlife these pathogens reside within [15, 16].

There are many examples of such event. It is for example now believed that the 2014 Ebola outbreak of West Africa was caused by deforestation. Fruit bats are the natural reservoirs of the Zaire Ebola virus (or simply, Ebola virus) [17]. Transmissions can take place via contact with blood, bodily fluids, secretions, and organs of infected animals and will lead to Ebola Virus disease that may cause hemorrhagic fever (fever and internal bleeding) with a mortality rate of 50 % (ranging from 20-90 % depending on the outbreak). A study into the Ebola outbreaks since 1976 suggests a clear association between outbreaks and forest loss after 2004 [18]. The WHO has since stated that the 2014 epidemic most likely originated in a small village where an 18-month old boy was infected in his backyard, before dying a few days later…

Another example of disease thought to be driven by the changing ecology is Lassa fever. Lassa fever is caused by the Lassa virus. The reservoir of this virus are the multimammate rats, which can excrete virus in its urine for an extended period of time after infection [19]. Deforestations are also believed to be leading to the increase of these infections. The most likely place of transmission of this virus from rodents to humans is believed to be in people’s homes.

More globally known of transmission close to cities are that of rabies virus, through numerous animals such as dogs, racoons, foxes, and many more. Animals infected with rabies are unfortunately more aggressive, leading to more attacks on others and thus increasing the spread of the virus. Think zombies.

This series of unfortunate events take place because we have forced wild animals out of their natural habitats and closer to people, or rather forced ourselves into their natural habitats. With the growing population and advances in technology, our need for more space and more resources will undoubtedly continue to entice spill over events. We need to listen to conservationist, not just because the loss of biodiversity is bad for ecology, or that the ecological cycles are disrupted as species die, or that plants help counteract greenhouse gasses, but because the loss of natural habitats lead to interactions that can be devastating to our societies. Because it is a matter of life, death and year-long lockdowns.