If you visited the website or our social media a few months ago, you might have read this piece introducing One Health. To emphasize the importance of One Health, we bring you this three-piece series on the impacts of human decision on the spread of disease. This first piece in the series breaks down this in the context of globalization, mass travel and population. 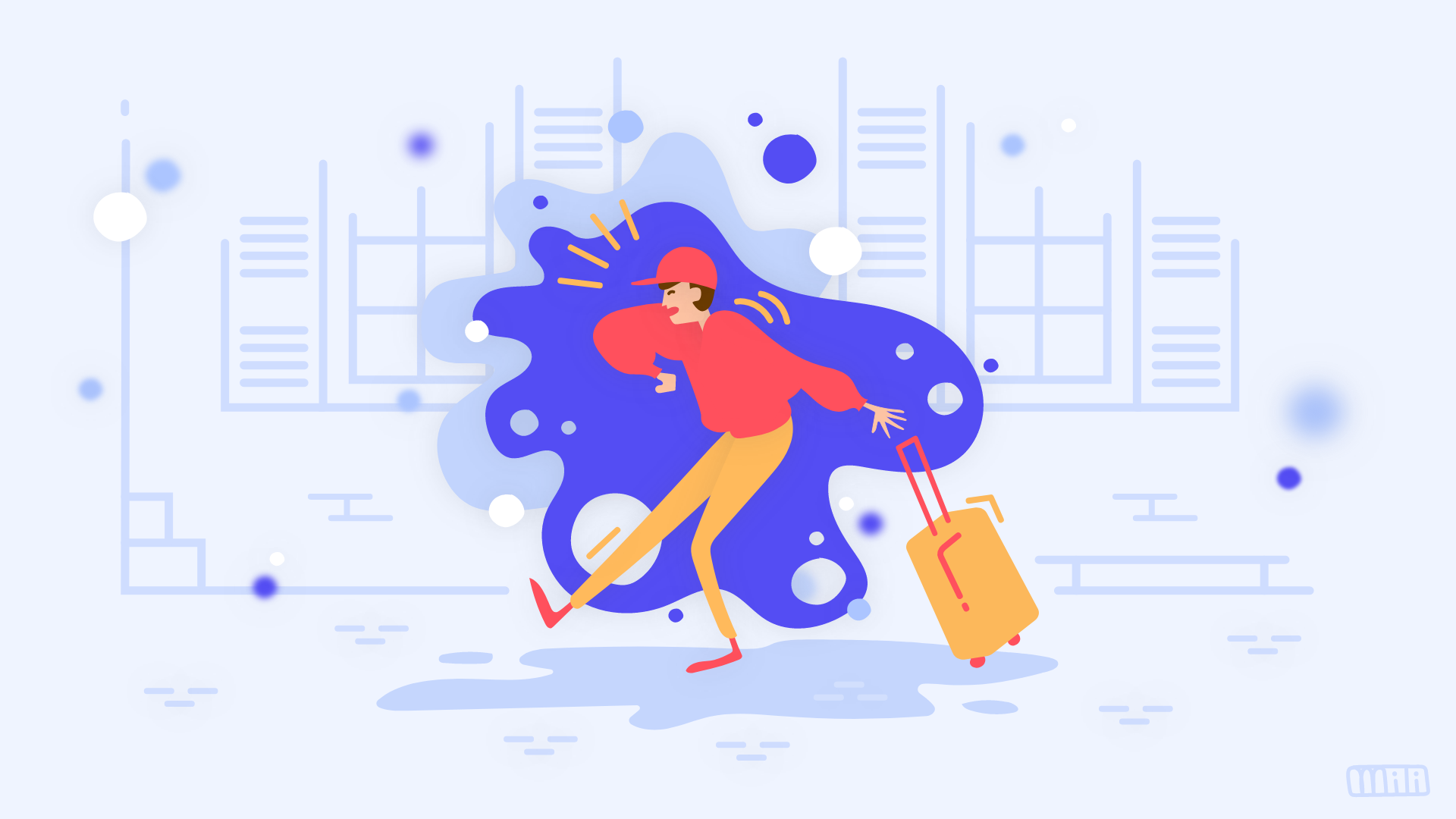 'Surrounded by pathogens' by @milie.dsgn for WISE. © 2021 Emilie Schaefer and What Is Science Even?

Pandemics. They’ve been around for longer than we might think, and they’ve caused havoc and death in numbers beyond our wildest imaginations. But in a rapidly changing world such as ours, do the dynamics of pandemics change as well? In this series on One Health and Pandemics, we will break down human influences on the spread of infectious diseases. Starting with more direct effects and then examining the indirect consequences of our actions. In this first piece, we will explore how globalization and travel directly changes the risks of pandemics emerging.

When reading about infectious disease, you will probably come across these four common terms: Endemic, outbreak, epidemic and pandemic. What exactly do they mean? We’ve summarized them all in a table below but let’s have a closer look at the two latter terms. Whereas an epidemic is an outbreak that spreads quickly within a geographic area or population, a pandemic is used to specifically describe such an instance where multiple countries or continents are affected. An epidemic can thus become a pandemic if given the right tools to do so. We will get more into this further down.

Common epidemiology terms. Prevalence = the proportion of a population carrying a disease at a particular time.

How do diseases spread? How do they go from being an outbreak to an epidemic, and in certain cases pandemics? Infectious disease can spread in many ways, in this series we will cover person-to person, via fomites, zoonotically, and through vectors(summarized in the figure below). Other ways include environmental reservoirs, oral-fecal routes, etc. In this piece we will mostly mention person-to-person, but as will become evident in the next couple of articles, zoonosis and vector-borne spread is becoming increasingly important.

A term that you might have run into a lot during this pandemic is ‘R’. The term R comes in different variants. The first one, R0, known as the basic reproduction number is a measure of how many new cases would emerge from a single case given an entirely susceptible population. By definition R0 can therefore not be manipulated but is a function of social behavior and the biology of the pathogen (how many contacts does each person in the population make and how contagious is the virus) [1]. If you want an example of what this number is useful for, we published an article on measles and herd immunity in 2019. You can find it here. On the other hand, the effective reproduction number (R, Rt, or Re) is a measure of the actual spread of a disease, and this reflects policies, immunity and vaccinations that may have been implemented to control an outbreak [2].

Now that we have covered some terminology, let’s break it down.

Four types of transmission. Person-to-person: can be via touch, droplets, sexual intercourse, etc.; Fomites: objects that can harbor pathogens from another person who has been in touch with it; Zoonosis: the spillover of pathogens from another species to humans; Vector-borne: diseases spread from other humans or animals through an arthropod.

With globalization, travel has gone from being a luxury to a necessity for middle to high income countries. According to the UN Word Tourist Organization, the number of international arrivals increased from 956 mil. in 2010 to 1.46 bn in 2019 – nearly 53 % [3]. In comparison, the world population had increased by 11 % in that same period [4]. The world being as connected as it is should make it less surprising that we have increased our risk of spreading pathogens. Neglecting the immunological reasons behind illness, this increased risk can be attributed to the sheer number of people we cross paths with. Globalization and travel have not only increased the risk of getting infected however, they have also increased the rate at which an infectious agent can travel distance. Take the 1918 flu for example, it took half a year before the disease spread worldwide, however, in a matter of months, COVID-19 was declared a pandemic by the WHO [5, 6].

Travel is one of the reasons why outbreaks can become epidemics and further develop into pandemics. Some very good attempts have been made to turn these apocalyptic-like events into movies. One of these is 2011’s Contagion starring Matt Damon, showing the rapid spread of disease starting with just one person. We have had many examples of these in the real world: the HIV and AIDS epidemic of the 1980s for example.  The virus, thought to originate in apes, quickly became known to the world as people carried the virus with them unknowingly (until it was too late) and transmitted it to their sexual partners [7]. Measles being a very contagious disease is another prime example of this. In 2018 and 2019 in New York, this virus that was locally eradicated reemerged, probably due to a mix of less vaccination and travel that reintroduced the virus (see our article on The 2019 Measles Outbreak). The most recent of these events is COVID-19. Going as far as to cause a pandemic, mass travel allowed it to disseminate much faster than regulations could keep up, and travel habits made it hard to impose travel restrictions quick enough to stop the spread. Even now during lockdown, we see variants crossing borders keeping SARS-CoV-2 afloat [8].

Populations and risk of infections

Another big challenge when dealing with the spread of diseases is overpopulation and urbanization. With populations growing, so has our population densities. In the United Kingdom, the population density went from 259.44 people per square kilometer in 2010 to 274.71 in 2018 – this is based on the total area of the UK, not just urban (e.g. London in 2020 had a population density of 5701 people per sq km) [9, 10]. In addition to that, urbanization has increased from 81.3 % to 83.4 % in the same period from 2010 to 2018. This is a less extreme example of how the population is not only growing, but is also being confined to the same physical area as before. If we think of this in terms of R0, the more people one person meets, the higher the reproductive value will be. A group in the United States has suggested a correlation between population density and R0, by comparing counties in the U.S. during COVID-19 [12].

In terms of urbanization, not only do we meet more people, but spread via fomites becomes higher as well. More people touch the same door handles, more people touch the same elevator buttons. Even person-to-person is increased as a result of closer living and lack of space. Not only are the areas more dense, but people are physically closer and therefore at a higher risk of infection.

In general, think of globalization and urbanization in this way: travel gives reach, overpopulation gives spread.

We have talked a lot about spread but are there any other implications? Yes. The more conditions (people) an infectious agent is put under, the more selective pressure there is. This oftentimes lead to the rise of new variants that may be even more contagious and well-adapted to the human immune system [13]. This effect can in return be worsened as new variants can spread worldwide. Diseases that are endemic in a certain population, of where the population has some immunity to it, may spread across the globe and infect populations that might be susceptible to that variant.

Is this the end of the line then? Are we doomed? Not necessarily. Globalization does not guarantee a pandemic (but pretty close to), nor does urbanization guarantee one. As a matter of fact, even during this pandemic we’ve seen some of the more densely populated areas doing surprisingly better than other major less dense cities. Travel increases the rate at which diseases spread, but what if no one boarding the plane were infected in the first place? And urbanization? True we all breathe the same air up close, but what if we were to filter this air before exhaling? One way to make up for the increased R_{0} caused by globalization and urbanization is putting measures into place bringing down the R_{e}. Vaccinations for example is a way of removing people from the susceptible group of people, and thus decreasing the effective reproductive number. More physical approaches exist as well. Masks that have been used by surgeons for decades is another way. And when it comes to fomites, general hygiene is a good start.

No matter how many precautions we may put in place however, mass travel and overpopulation will undoubtedly continue to put our lives in the risk of incidents such as the one in 2020. And maybe the best way to go about handling it, is to slow down for a second. And if we do travel and do live densely; we must be aware of the risks.

As always, if you have any thoughts or contradictions regarding what we have gone through, or if you just have thoughts on One Health and Pandemics you would like to share, we urge you to share them, either below or your favorite social media platform.