With the majority of people beginning to address climate change as a fact, its impact on natural disasters and indirectly people and their health is still a controversial topic. So is it all just natural change, or have we indeed entered the era of climate disaster? 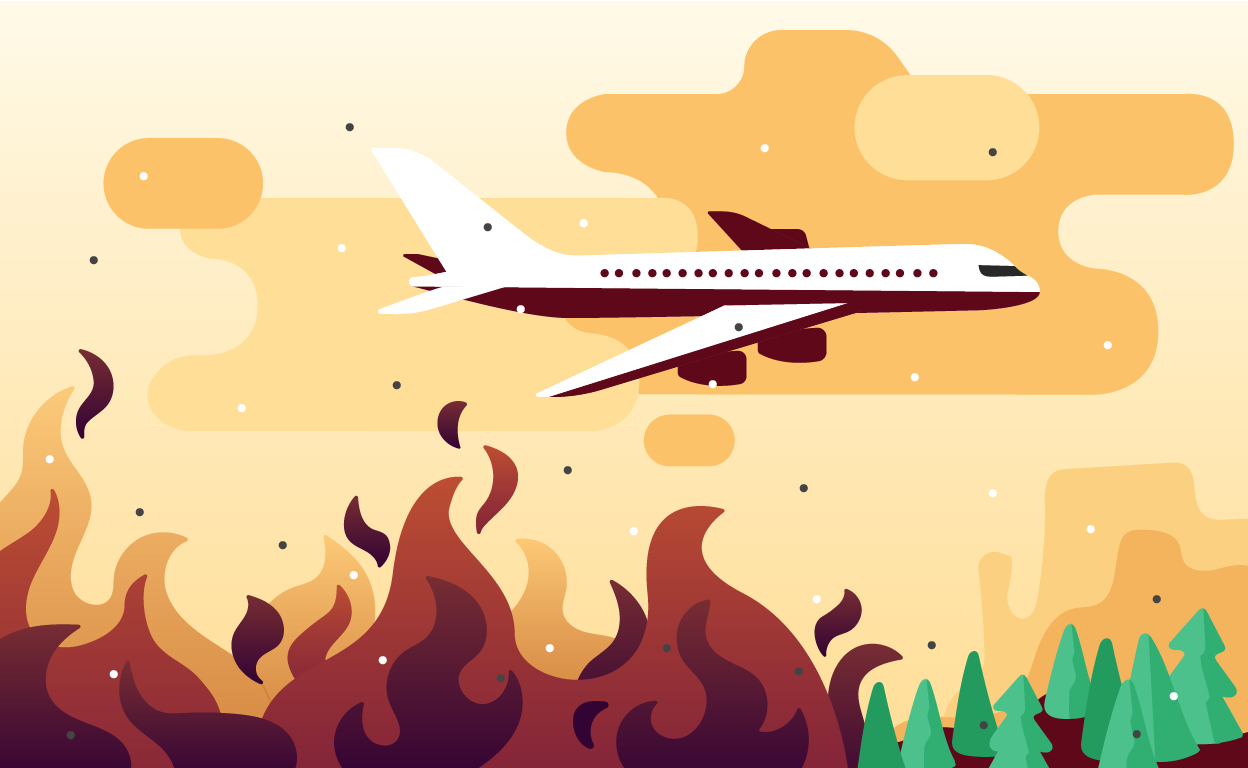 'Going home after a revitalizing vacation' by @milie.dsgn. © 2020 Emilie Schaefer and What Is Science Even?

As all the previous articles about COVID-19 have shown, 2020 has been an impressively lousy year. Even if the emission levels have significantly dropped due to the measures to contain the pandemic, there was still room for plenty of natural disasters [1,2]. The year featured wildfires of abnormal scales in the USA, Australia, and Brazil among others. For instance, five of the six largest wildfires ever recorded in California happened this year, leading to bold orange skies in San Francisco [3]. Furthermore, in the United States, for the second time in history, the official alphabetical list of hurricane names did not suffice, leading to two Greek letter names. In September, an unprecedented ten hurricanes hit the country, bringing this year one hurricane away from the record of 28 named storms, one month before the end of the hurricane season [4]. And we have not even started with the plagues of locusts in East Africa, droughts, floods, earthquakes and the likes around the world. However, this all leads to the question of whether the overall number of natural disasters has increased. If so, is there a connection to climate change?

A new report by the United Nations Office for Disaster Risk Reduction (UNDRR) compares the human cost of disasters in the periods of 1980-1999 and 2000-2019, which feature similar coverages of natural disaster records. Thanks to the length of the observation period, statistical outliers have less impact on the data. The figures show a slightly increased death toll of 1.23 million people in the last two decades (1.19 million between 1980 and 1999). The number of people affected by natural disasters climbed from 3.25 billion to 4.03 billion (people can be affected multiple times). That the numbers are not higher is due to the implementation and improvement of early-warning systems. However, the data shows a significant 74% increase in natural disasters, from 4,212 in 1980-1999 to 7,348 in 2000-2019 [5].

Due to climate change, average temperatures have increased throughout the last decades and an end to this trend is not in sight. This leads to higher numbers of significant heat waves, instigates a reduction of summertime soil moisture, and leads to an increase in evaporation [6]. Another factor is a change in precipitation patterns, which is characterised by fewer but more intense rains. As the temperature rises, the capacity of air to transport water increases, thus leading to more water being carried per volume of cloud. Furthermore, reductions of rain frequency lead to more convergent transport of moisture, consequently making wet regions wetter, and dry regions drier. Finally, due to the higher temperatures, less snowfall and faster melting snowpack, soil moisture in the summertime – when it is needed – is much less [7].

Those changes impact natural disasters, as they directly lead to higher risks of droughts. Besides the impact on food supply, it affects the likelihood of wildfires [7]. Even though negligence of forest management, including the lack of controlled burnings, have had a part in the dimensions of this year’s wildfires, the aridity has been the main factor for the extent of the disasters [8,9]. On the other hand, more intense rains are likely to lead to floods [7]. Constituting 44% of all natural disasters, their threat is higher than ever before, as significant sealing of the soil in inhabited regions prohibits a normal water percolation into the ground [5]. Besides that, intense precipitation events can lead to very warm and humid places, promoting the massive reproduction of insects such as locusts, which intensifies plagues as they took place this year in East Africa [10].

The controversy of linking climate change to natural disasters

When it comes to hurricanes and strong storms, the impact of climate change is more controversial. As Pielke et al. put it, linking them would be premature because no behavioral changes have yet been observed and proven, the changes would probably be comparably small and the process of the formation of tropical cyclones has not been understood well enough to deduce such a correlation [11]. However, a recent study has shown that over the period between 1900 and 2019, the frequency of strong hurricanes has significantly increased, with the occurrence of the most destructive (= equivalent area of total destruction over 1209 square kilometers) more than tripling [12].

A correlation between climate change and geophysical disasters such as earthquakes, volcano eruptions and tsunamis, however, is unlikely. The overall temperature rise since the pre-industrial period due to climate change was 1.1 °C in 2009, whereas the inner core has a temperature comparable to the sun’s surface and is thousands of kilometers away [5,13]. Therefore, due to the inherently different dimensions, the impact of climate change is not likely to go beyond Lorenz’s butterfly effect: ‘Does the Flap of a Butterfly’s Wings in Brazil Set Off a Tornado in Texas?’ [13]. Based on the Chaos Theory, this effect describes the impact that minuscule variations of the initial conditions can have on a later result [14].

However, even if wealthy countries are also dealing with natural disasters, the affected people are predominantly from low-to-middle-income regions. Especially, the death toll is disproportionately high in poor countries [5]. Among others, this circumstance is due to the variety of other important economic and social threads in everyday life, rendering floods a comparably minor issue [15].

It can be said that a direct correlation between the majority of natural disasters and climate change is very likely. Floods and droughts being the major ones accounting for 76% of affected people. But also heat waves, wildfires, plagues of locusts and probably hurricanes can be directly linked to climate change as well. And once again, poor people pay the price.