Widely regarded as one of the worst pandemics of human history and as the mother of all pandemics1, the 1918 Influenza strain rapidly spread throughout the world killing an estimated 50 million people worldwide. With its origin still unknown, this H1N1 Influenza strain is considered to be the foundation of many of the Influenza pandemics since, and is still used as a prime example of worst case scenarios for disease outbreaks. A world in standstill. 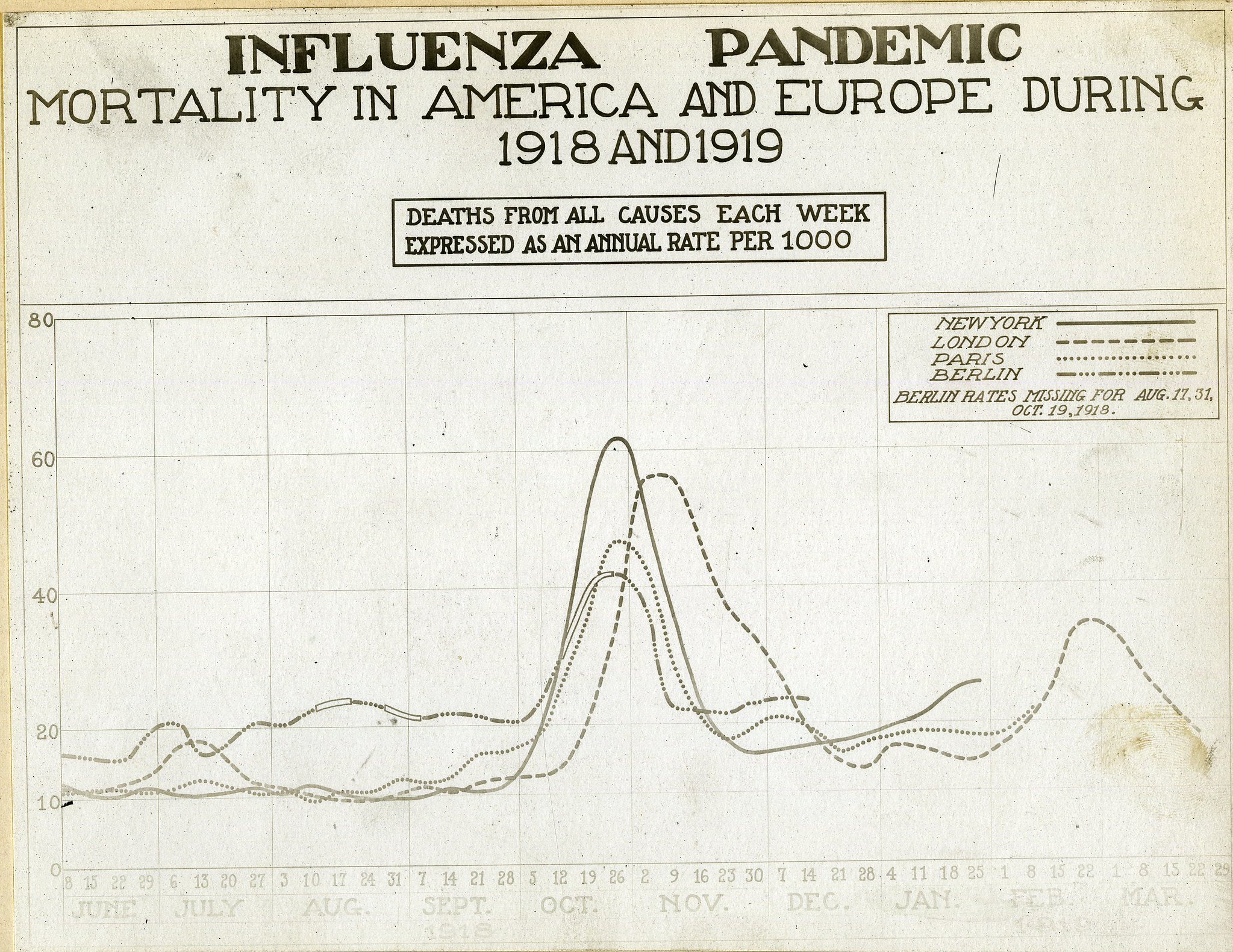 The year was 1918. The world was occupied with the World War. By the start of the 20th century the steamboats had significantly improved travel between continents, and the expanding railroad were improving travel across continents. Then it happened: beginning in the spring of 1918 – unprecedentedly – an influenza virus swept through the world. A third of the world’s population fell ill, and an estimate of 50 million died within the course of a year [2]. Some even regard the latter number as an understatement [3]. Consistently used as the go-to example of pandemics and worst-case scenarios, its name found its way to news outlets and other media during the start of the COVID-19 pandemic. Although very different from a biological perspective, its history is still relevant, and important in understanding disease dynamics of viral infections. Let’s break it down!

An epidemic in the making

The 1918 pandemic took place in three waves, with the commencement of the first being in the spring of 1918 [4]. Although the exact origin of the virus has never been discovered, the first recorded outbreak began in Camp Funston, Kansas (United States of America) in the spring of 1918 [4]. The epidemic is recorded to have begun on March 5th [4]. During the following month, the virus spread amongst military personnel, and by April it was affecting civilians as well as military populations [4]. It is suggested that the virus reached France via American troop ships in early April, and quickly spread throughout the country [4]. Portugal and Spain became affected in May [4]. The virus continued to spread and reached Germany, Scandinavia, and the United Kingdom in June of the same year [4]. Additionally, the virus was also spread to Bombay (India) in May aboard passenger ships, where it spread to the Indian subcontinent via the railroad network [4]. By June, Australia, New Zealand, and the Dutch East Indies had also been impacted by the virus [4].

There is no evidence to support theories that the spring wave began in China [4]. It has been suggested that such theories began as wartime propaganda in Germany [4]. Although the first wave quickly spread from the American Continent to Europe, that is not considered the deadly part of the 1918 pandemic. That came with the fall.

A pandemic seizes the world

The fall wave is speculated to have originated via a mutation or recombination event in western France in early August of 1918 [4]. It was also the deadliest of the three waves, with the third and last oftentimes disregarded completely (as in the case of this article). The first reports of this outbreak came from Brest (France) on August 22nd of 1918 [4]. Ships carried the new strain from the port of Brest to destinations in North America and Africa [4]. The new strain is reported to have appeared simultaneously in Boston (United States of America) and Freetown (Sierra Leone). The infection in Freetown is traced back to British sailors aboard the H.M.S. Mantua [4]. The flu then spread further from these destination [4].

From England it moved to Scotland and Scandinavia. It spread south from France to Sicily and on to the Greek islands [4]. Spain was infected from Portugal and the Pyrenees [4]. The virus spread quickly and by October most cities in central and western Europe had epidemics [4]. From there the disease continued to spread to more countries in the world through shipping routes and railroad networks [4]. Although New Zealand was struck already in October, Australia managed to keep itself protected by imposing a vigorous quarantine and remained so until January of 1919 [4]. By this time most inhabited places had been reached by the virus, with only a few remote locations as exceptions [4].

The pandemic in numbers

It is widely agreed that there is a shortcoming of recorded statistics of influenza: There is a significant understatement in respect to morbidity and mortality of the 1918 pandemic [3]. Several reasons have been put forth that may account for this shortcoming. These range from direct patient interaction: nonregistration, missing record, misdiagnosis, etc.; but may also arise form regulations shaping the deadlines for reporting, inconsistent coverage and reporting in different populations [3]. The mortality of the 1918 pandemic has consistently been upregulated since the first estimate of 21.5 million [3]. This number was later revised by different authors to 24.7-39.3 million [3, 4]. More recent calculations from a better foundation, estimate the tally to be anywhere from 50 to 100 million [1, 3], with the reservation that an accurate number may never be calculated [3].

Despite the proposed origins, North America, Australia and Europe had the lowest death rates, with Africa and Asia having the ones with the highest [4]. Although the death rates are still debated, the numbers collated by one study is summarized in Table 1.

Changes in our perception of the pandemic and lessons learnt

Due to the significance of the 1918 pandemic, many researchers have the past century studied the dynamics of the virus and the biology of it. Considering that viruses as a separate entity were relatively recently discovered prior to the pandemic, not much was known about how to study them back in those years, and much of what we know about the virus has only recently been elucidated, with the advancement of technology and procedures in the field [6]. Despite of this, a lot of missing pieces still become apparent as we did not have the possibility to capture and store the virus back then. This had left researchers with limited resources to study the virus, as the only intact viruses are from conserved lung samples from 1918 patients repurposed for research almost a century later [7, 8].

However, with a better perspective on the events of 1918-1919, epidemiologist and historians have had a better chance at exploring what went on during the infamous pandemic. For instance, the changes in the estimation of disease burden during the last century. The reason for this is the identification of the inconsistencies in what the numbers reported about influenza deaths represent: Deaths solely attributed, exclusion of superinfection, data from rural areas and certain demographics, specific period (i.e. does the tally reflect a specific wave or the entire period), etc. [3].
In addition to the epidemiological perspectives that have been improved, some political elucidation has also taken place.

Have we learnt our lesson, or are we running in circles? Do share your thoughts.